Today we are in Osiyan, India which is about 40km north of Jodhpur on a camel safari!! We decided to change our plans and skip Jaisalmer, but we still wanted a touch of the desert, so we came to Osiyan. We stayed with a fantastic farming family, rode camels into the sunset, drank chia on a dung floor and slept under the stars. I even saw one shoot across the sky…Make a wish!

Tomorrow we go back to Jodhpur, then we will take a day bus to Udaipur.

First of all, I want to send my thoughts and prayers out to all of the HinduÂ families that lost husbands, fathers, sons, brothers and uncles in the trajic event that happened at the Jodhpur Fort this past Tuesday, October 1 where over 200 people were killed in a stampede during the religious festival of Navratra.Â  You can read more here.

In our travel news, we arrived safely in Jodhpur early yesterday morning from an exhausting 12+ hour train ride from Agra.Â  So far we have walked through the streets, ventured up to the fort and taken a 5 hour Indian cooking class.Â  The cooking class with a Saphron Lassi has been the highlight so far, and I’ll tell you all about it later.Â  I hope you are doing well!

For two hours on October 2nd, the Taj Mahal was free to all visitors. The unexpected generosity (that saved us 1500 Rs) was due to the end of the Muslim fasting period of Ramadan. I don’t know the religious significance of this month long period, but when I have the opportunity, I would like to do some research.

We took advantage of this time to see the beautifully built memorial and watch our first Muslim prayer. There were thousands of men standing in rows at the mosque with the leader’s voice broadcast over loud speakers. They began in a standing position, and in unison bent at the waste, stood upright again, knelt and bowed their heads to the floor, then stood upright once more. This sequence was fascinating and beautiful, and I feel very fortunate to have been a witness. 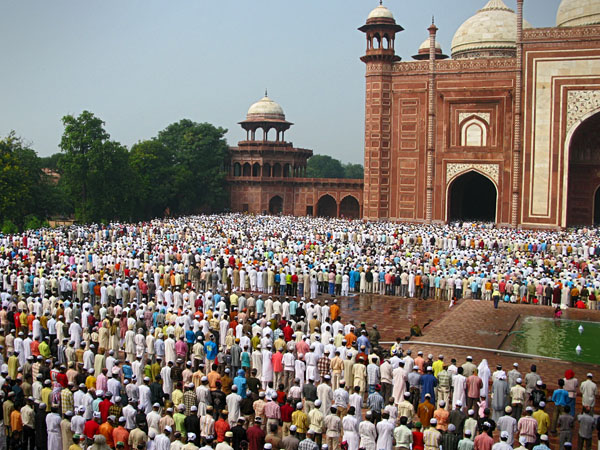 While their fathers and brothers prayed, the children circled around the shoes at the back.

Other than that, the Taj Mahal was nice. It was built by the Mughal Emperor Shah Jahan as a memorial for his second wife, Mumtaz Mahal. The masses of people were distracting, and I only had a few fleeting moments where I felt one with the architecture. The details of the marble were impressive, especially the colored inlays and carved light screens. I have heard that the emperor cut the hands off the stone masons that built the memorial so that they could never replicate it. I hope it is not true, but if it is then I am sad that so many people suffered because of this structure.

View towards the Western Mosque

Gardens of the Taj Mahal

On our second day we had breakfast on our guesthouse roof and met another couple that is traveling through India. Marie and Thomas are French Canadian and French, respectively. We chatted through breakfast and then they joined us on our trip to the Red Fort.

The entry fee is steep, 250 Rupees, but well worth it. The complex is a rambling series of outdoor rooms made of red sandstone and white marble sprinkled with dry fountains and bizarre niches. A lot of the detail has been restored so imagining the grandeur of the place is not hard.

View towards the river 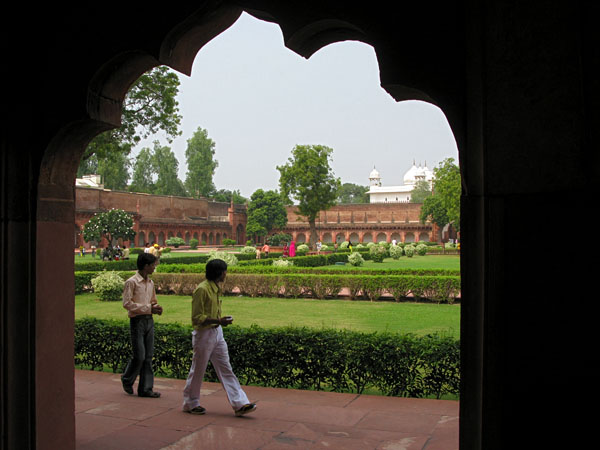 Fountains: Many of the fountains were detailed with this black, grey and white marble zig-zag. I wish we could have seen water run over it though.

In Ruins: The front area is in a state of disrepair, but is still beautiful.

The most unfortunate part of the visit was the young Indian men that would come up to me every 5 minutes asking to take my picture with themÅ“. Nik’s theory is that they hang around the fort because this is the only place they can get close to a girl. He suggests that they probably don’t even have film in their cameras. He is probably right, and after the first 10 I did start to feel violated. I often had to leave a room because they would not leave me alone when I told them I wouldn’t pose for a snapshot. If they hadn’t been there, I could have spent all day at the fort and I would have taken a lot more great photos, but because of the annoyance, we left after a couple hours and enjoyed the solitude of our hotel room for four hours before our night train to Jodhpur.