Our Tuscan Home in San Donato in Colina

I have been dreaming of driving around the Tuscan countrysideÂ visiting small towns along the way since 2005 when two men that I admire purchased a house there. I imagined small markets, narrow roads, vineyards, hills and elderly Italians. Over the past six days, my dream came true.

LastÂ Thursday morning, Nik and I rented a manual transmission Fiat Punto. HeÂ took the driver’s seat, and I was hisÂ navigator. We made our way out of town to the scenic route through the Garfagnana Valley that runsÂ between the ApenninesÂ mountains to the north-east and the Alpi Apuane to the west. The forests were not lush with fresh spring leaves quite yet, but driving through the valley and up and down the foot hillsÂ was amazing. We also had a great meal at a random Trattoria on the side of the 2 lane backroad we were on.

As we neared Lucca, weÂ made our way to the Auto Strada to take us the rest of the way to Florence. We had both read about how to navigate the ticket & toll booths, so we knew NOT to go through the Telepass lane and that we HAD to get a ticket when we entered. Otherwise, we would be fined and it would be a nightmare.

Once in Florence, we exited the Auto Strada and paid our 5,50â‚¬ toll and switched from Google Maps to the detailed driving directions that were sent by the couple we were renting an apartment from. When we found our home in Tuscany, it was everything we hoped it would be. We settled in before walking through the little town of San Donato in Colina to buy supplies for dinner and breakfast the following day. Then we sat back to enjoy the sunset and a quiet evening.

Our view with Florence in the distance

Sunset over the valley from our Castle

It rained on our second day, so we went on a bigger grocery run and did laundry. In the afternoon, we strolled up to the monastery near by for an even better view of Florence, and then spent the evening planning and researching for Sicily and Turkey.

On the third day, we drove scenic State Route 222 south to Siena. Nik honed his Italian driving skills, and I took the wheel for a little while as well. My goodness, that was exhilarating!!! It was the first time I have ever driven a car in a foreign country (other than Canada), and what a great place for my first time.

Siena, as expected, was stunning. The main tourist streets were busy with school groups, but the side streets were nearly empty. We happened to find a local wine and food showcase in the Mercato where samples of cheeses, dried meats, breads, and panforte were plentiful. Nik took a liking to the panforte so we tried to purchase a small wheel from one of the vendors, but apparently they weren’t selling it. We thought it was odd, so we carried on and found it in one of the tourist shops on the main square later that day.

The cathedral in Siena was the first we have seen with black and white marble laid in alternating stripes on the facade and interior. I remember seeing photos of this in architectural history class, but seeing it in person was much more memorable. Also, the floors of the Siena Duomo have carved marble depictions of biblical scenes using red, white and black marble.

The pulpit and carved stone floors of the Siena Cathedral

Piccolomini Library in the Siena Cathedral

On the drive back, we went through the Chianti region taking a few detours to see what we could see.

On the fourth day, Sunday, we drove to Florence and spent the day walking through the main streets and side streets trying to avoid the tourist masses as much as possible. We also searched for restaurants unsuccessfully for at least 2 hours which led to a couple of cranky Americans with cameras.

Every corner has details 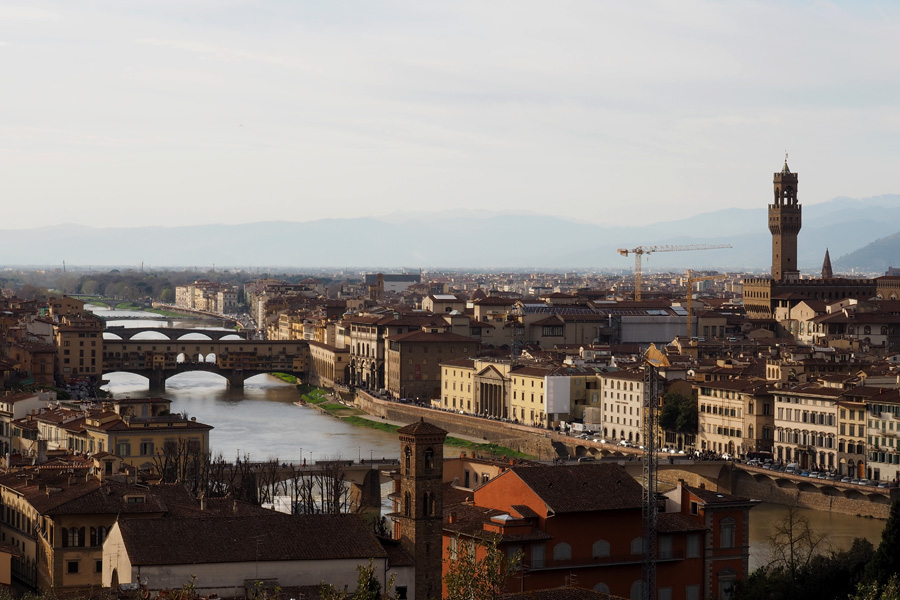 On our fifth day, we slept in and took a drive. The goal of the drive was to have dinner at a restaurant on the north side of Florence, but instead of heading north, we entered the Auto Strada heading south and couldn’t get off for another 20 kilometers. At that point, we abandoned the plan for dinner and meandered through the countryside and along the river and back home.

For our sixth and finalÂ full day in Tuscany, we drove south again to see the hill townÂ of towers, San Gimignano. We took the highwayÂ there and then took our time winding through backroads on the way back. The city is the ultimate small, Tuscan hill town. The historic city center is a smaller version of Siena with architecture that is even more consistent and clean swept. After making a loop through town, we stopped for lunch at a garden cafe owned and run by a sweet young Italian couple. Then we climbed to the top of the tallest tower in town for a panoramic view of the surrounding countryside and celebrated our accomplishment with gelato.

Nik at the bus stop

The streets of San Gimignano

View from the Palazzo Comunale tower in San Gimignano

When we got back to our apartment, Nik took a nap while I watched a Harry Potter movie.

On our final day, we packed up and left our Tuscan home around 9:30am for one last super drive on the Auto Strada to Venice. Our week was perfect, and I would do it again in a heartbeat. I thinkÂ we had an easier time on the roads and in Siena, Florence and San Gimignano because it is not tourist season yet. I honestly cannot imagine keeping Nik happy in Tuscany if there were more people everywhere…I’m glad I didn’t have to!