The most ornate elevated train I have ever seen

We went to Antwerp without knowing much about the city, so everything was unexpectedly pleasant! The people were nice. The buildings were beautiful. The food was decent. Basically, it was exactly what I hoped a mid-sized European city would be with the highlight of Art Deco additions to many of the older stone houses. 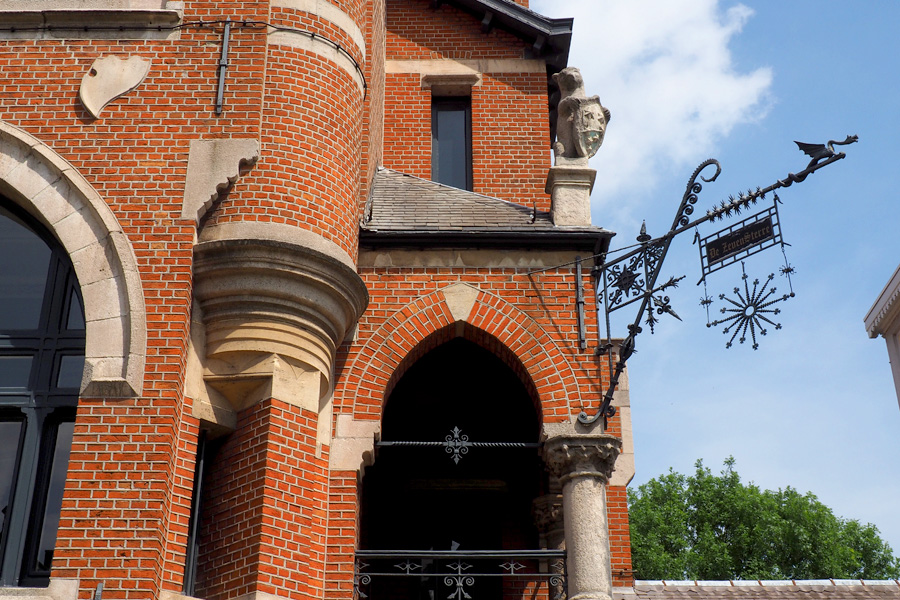 The street of art deco

It seems like this should be more than a car park

The tunnel at the end of the tram line

Villa Augustus – view from our table at the Restaurant

After Amsterdam, we took a train ride out of town for a weekend at Villa Augustus. The Villa is a 5 minute bus ride from the central train station, and as the bus pulled away and we stood on the sidewalk, Nik said, “Whoa! Look at that cool brick building.” And I replied, “I know…that’s where we are staying!”

The hotel/market/restaurant/event space/garden is housed in an 1882 water tower and pump house that was built to provide municipal water for the town of Dordrecht. The facility was functional into the mid 20th century, but sat vacant for a while before the current owners reinvented it as a design hotel. The main building alone is magical with 37 beautifully appointed and unique rooms, but it is also surrounded on all four sides by gardens and greenhouses. These supply most of the fresh produce and herbs for the restaurant and market housed in the adjacent and more modern (1940s) pump house.

The hotel, market, restaurant, event space, and garden each draw their own crowd. Visitors wander the gardens without stepping foot into the restaurant. People sleep in the old basin of the water tower without ever buying produce from the market. Guests walk straight to the Lemon house for a wedding without even realizing there is an Italian garden out back. I wanted to do it all. Before we even dropped off our bags, Nik was pointing to the broccoli plants and pear trees. After we dropped them, we criss-crossed the vegetable garden before finding a terrace seat at the restaurant for lunch. After lunch, we continued to explore the grounds before heading up to our room. After relaxing a bit, we went to the market to buy a pint of hotel-made rhubarb sorbet which we shared on a bench sitting next to the greenhouse where the rhubarb was grown. Then we climbed the exterior stair tower to the top before strolling through the rear gardens. Then we went back to the restaurant for dinner, but this time we chose a seat inside and watched the chefs do their magic as families and couples dined all around us. Afterwards, we retired to our room for a little while before walking out again into the garden for sunset. This place is everything I have ever dreamed a hotel would be. It is a destination for everyone, young or old, moneyed or not, couples or families, singles or sisters. It is unpretentious and affordable. The staff is kind and does not get in the way of you enjoying your day. The place also teaches anyone who wants to learn about edible gardens. It was a dream come true, and I hope to find more places like this. Or perhaps I’ll create a place like this of my own one day.

The view from our room

The Italian Garden out back 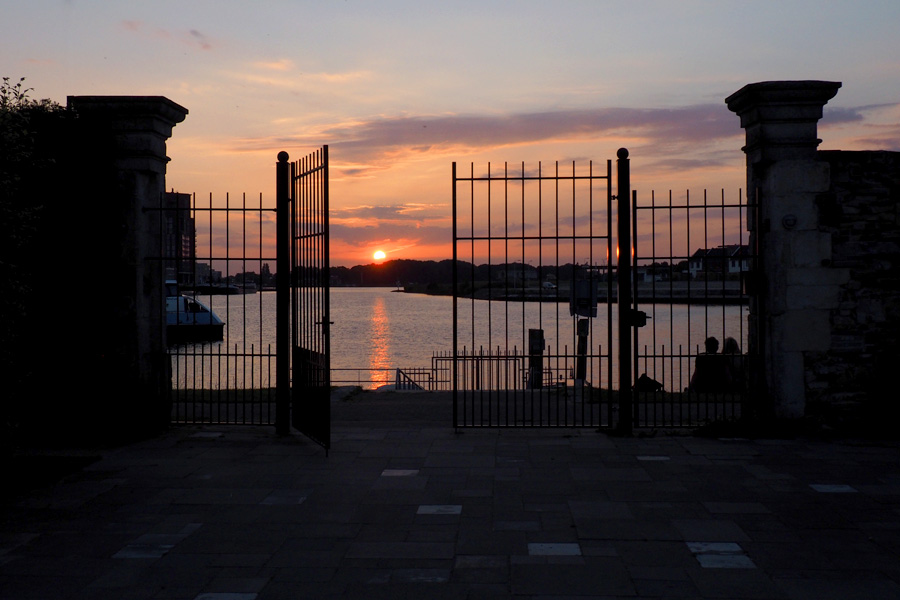 The water tower from the Italian Garden

On our second day in Dordrecht, we walked into town to explore the historic center. On the way we found typical apartment buildings filled with families slowly beginning their Sunday. Once in town, we found most of the commercial area shuttered for the day which created a calm and somewhat abandoned feeling to the streets. We didn’t mind because it meant that we had fewer obstacles to maneuver around and could see the buildings better!

Apartments that remind me of my grandfather’s 1950s house

After our walk, we enjoyed Villa Augustus some more by strolling through the gardens, relaxing in our room, having dinner at the restaurant, sharing another pint of rhubarb sorbet, and watching the sunset from the stairs.

It was a truly amazing weekend, and if you ever find yourself in The Netherlands, spend at least 2 nights here. You will thank me.

Our first stop in The Netherlands was its most populous city, Amsterdam. We stayed in an apartment just outside of old town for five nights, and made the most of every moment. As soon as we arrived, we had dinner at a local bar/cafe and wandered around the neighborhood before getting groceries. Then on our first full day, we walked downtown and explored the nine streets area where I fell in love with the canal houses. Each one had its own character with subtle differences. We also admired all of the houseboats that lined each canal and were covered with potted plants and deck furniture.

While we were out, we stopped by the central train station and purchased 48-hour Amsterdam city cards (€59 each). We did the city card thing in Dubrovnik, and it easily paid for itself. I thought about it in Copenhagen, but decided against it and kind of regret it. So when we looked into the Amsterdam version and saw it covered admission to a few different museums we wanted to go to anyways, all public transportation, and a canal tour, we decided to go for it. Of course, as soon as we made the investment, I looked at every single “free” admission item and charted our route for the 48-hour window taking into account opening hours, distance from home, access to transportation, and proximity to restaurants. It turned out to be a great way to see the city, and we only saw about half of the buildings/museums/exhibits I had marked.

Day 1
Amsterdam Zoo – the butterfly house was by far our favorite
Micropia – By far the best exhibit I have ever been to. Props to Kossman.Dejong & Art+Com Studios
The Hermitage – The portrait gallery is amazing, and because we went pretty quickly through the Alexander, Napolean, and Josephine exhibit, I left a little more informed but also confused by their relationships to one another and the early 19th century history of France and Russia. I think that’s okay because now I want to research it more so that I actually understand it.
The Botanical Gardens – Again, the butterflies! Also, the beautiful green houses were a highlight.
Canal Tour – pretty gimmicky and the view from the water isn’t any better than from the street. I definitely wouldn’t pay for this on its own.

Day 2
Stedelijk Museum – I went for the architecture. While the exterior of the new addition looks like a bathtub, it’s still intriguing. However, the interior galleries are beautifully lit, flow seamlessly between the old and new, and highlight the original details including the grand staircase. Unfortunately, the new super escalator tube was closed when we were there. Also, there happened to be a Matisse exhibit that was great.
FOAM – A photography gallery in an old canal house. Kind of quirky and confusing.
Museum Geelvinck – An old canal house with a beautiful garden. The house wasn’t much, the garden was.
Museum Van Loon – Another canal house with an even more beautiful garden! The interior was just as amazing as the exterior.
NEMO – Again, I wanted to visit this one for the architecture and I actually thought it was the maritime museum because the building looks like the hull of a ship. But it’s a science museum full of little kids and germs! Even so, Nik and I walked in expecting to walk back out in five minutes and ended up staying an hour.
EYE Film Museum – There are several reasons to go to the EYE…1) The building 2) Free ferry ride 3) Dinner or drinks overlooking Amsterdam 4) cool exhibits (The William Kentridge exhibit there now is fantastic) 5) fantastic movies – we saw Blade Runner – Final Cut and I finally understand what all the hype is about.

On our final full day in the city, the public transportation portion of our card was still active, so we rode one of the street cars all the way to the end near the IJmeer Lake. It was nice to see the mid-density residential neighborhoods and we had fantastic ice cream.

Chillin in the window

My worn out dinner companion