Day 4 began with rain and ended with me being completely smitten with this town. I spent the entire afternoon wandering up and down the lanes of Bukchon between eating meals, drinking coffee and indulging in desert in Samcheongdong. These neighborhoods contain several clusters of traditional “hanoks” in the midst of more modern concrete structures. A hanok is a traditional Korean style courtyard house whose design is based on the Korean equivalent to “feng shui”. Materials, proportions, orientation and function are all considered and utilized to create the most pleasant living environment possible.

My starting point was the Bukchon Traditional Culture Center on Gyedong-gil alleyway where I picked up a beautiful map of the area illustrating all of the cultural sites and each individual hanok. From there I simply wandered around until I got hungry. I took a lot more photos than the ones here, but the sky was so bright that most of them were blasted out. Also, these streets are extremely narrow and I don’t have a wide-angle lens, so it was hard to capture the feeling of the place.

Mrs. Kilburne at her house

Then I went over to Samcheongdong which is a small district to the west of Bukchon that reminded me very much of NW 23rd Avenue in Portland. It was filled with clothing boutiques, restaurants, and fashionable people. Luckily, I had combed Anna’s favorite restaurants flickr photos (of the blog Annamatic) and learned of a couple restaurants to try. One that peaked my interest was a shop serving the traditional Korean porridge called patjuk. Patjuk is a red bean soup made with azuki beans and is often eaten during the winter, but I thought it was quite delicious in late July as well! My bowl contained the soup along with a glutenous rice ball, roasted chestnuts, cinnamon, a green bean of some sort and another black bean of some sort.

The best Patjuk in town!

As I walked down the main street of Samcheongdong, I was blown away with the number of places touting coffee! There were “coffee & waffle” or “cofee & ice cream” or “coffee & wine” or “coffee & bread” or even “coffee & beer” shops on every single corner. I found it a bit ridiculous, but I did have to indulge in the atmosphere a little bit. It is shallow of me to admit this, but I chose my coffee and dessert stops based solely on the decor. 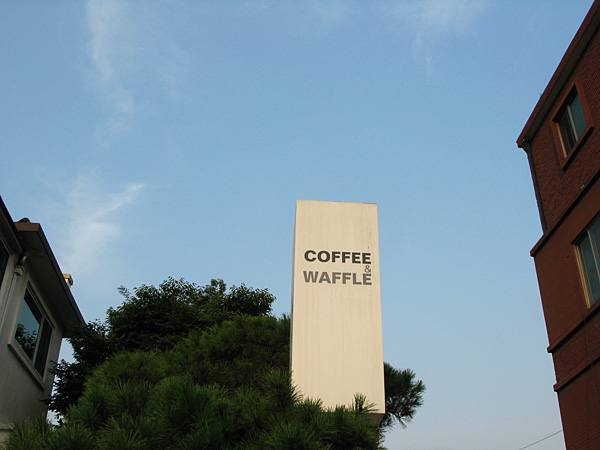 After lunch, Chong Lee drew me in. I fell for it when I saw their “bar stools”. I thought it was clever, so I had a siphoned ice coffee.

Then after dinner, I stopped by Lamb, an adorable little desert shop with a second floor seating area that has huge hinged windows. The interior was done in all white and dark wood and has just the right amount of softness without seeming girly. And they had an ice cream sundae on their menu, so I was sold. Unfortunately, I didn’t look at the price tag. It ended up being 13,000â‚© ($10.80), which is pretty steep but was worth every penny. It was the best ice cream sundae I’ve ever tasted.

The Best Ice Cream Sundae EVER

To walk off the extra calories, I meandered through Bukchon a little bit more after dessert. I enjoyed seeing the little alleyways lit only by the occasional street lamp. The textures popped even more than they did during the day.

Finally, I made it back to room #306 and was really missing Nik. This is the longest solo trip I have ever taken and while I enjoyed every second of it, there were plenty of times where it would have been more fun if he had been there.

I’m glad you got to try the patjuk at “ì„œìš¸ì„œ ë‘˜ì§¸ë¡œ ìž˜í•˜ëŠ” ì§‘” (it modestly translates to “The 2nd best place in Seoul” — that’s some delicious stuff, and I usually don’t even like adzuki beans! I’m enjoying your Seoul posts — they’ve helped me see my adopted city through fresh eyes :-)

Thank you for visiting the Kilburn Art Space last week. We hope that you had a great time in Seoul.

We’ve put up a link your blog on our website: http://www.kilburnartspace.org/ENG/events.html

that ice cream sundae does look like it’s worth every penny! and you’re so smart – anna[matic] is such a great resource :)

Hey! Stumbled upon this while googling “Bukhansan National Park” and will add Bukchon to my list of places to check out while in Seoul. (I’m researching Korea right now as I’m considering teaching English there for a year and want to get a sense of the place.) I was heartened to read of the patjuk as it sounds like it might/could be vegan, and I’ve come to the understanding that meatless fare is rare in Korea. Also, I’ve never thought of pairing strawberry and ginger before, but the look of that sundae made my mouth water – I’ll be sure to incorporate both flavors into my next dessert!