For the Chinese National Holiday, Nik and I both had a week off of work, so we skipped town and headed to Seoul, South Korea. I know, I just went there two months ago….but I loved it and couldn’t wait for Nik to see it too. Plus, flights to Seoul are cheaper than any other east-Asian destination outside of China, and I am still on a 90-day visa so I had to leave. Also, neither of us had the time or energy to research a new country enough to make our visit worthwhile and relaxing, so Seoul it was.

I have already written about my view of Seoul in 5 previous posts, so I won’t bore you again. I do want to link to the new blog posts Nik has written and share a few of his photos (my camera is broken) of parts of Seoul that we experienced for the first time together. As I expected, every part of the city was better with him holding my hand.

A Kimchi stew restaurant near a Bus 171 stop

Herbs and Spices at Gyeongdong Market

View of Seoul in front of our Lock

On my final day in Seoul I wanted to have at least one more unique meal and I wanted to stand at the top of the Namsan Tower with the best possible view of the city. To find my meal I headed to Kwangjang Shijang just before lunch time expecting to find a bustling marketplace filled with food, clothing, electronics, and who knows what else.

Unfortunately, it was Sunday, and the market was anything but bustling. There were a few shops open and several of the food stalls were doing great business, so I chose to feast on a Korean pancake made with a corn batter mixed with onions and peppers and then deep fried to crispy perfection. 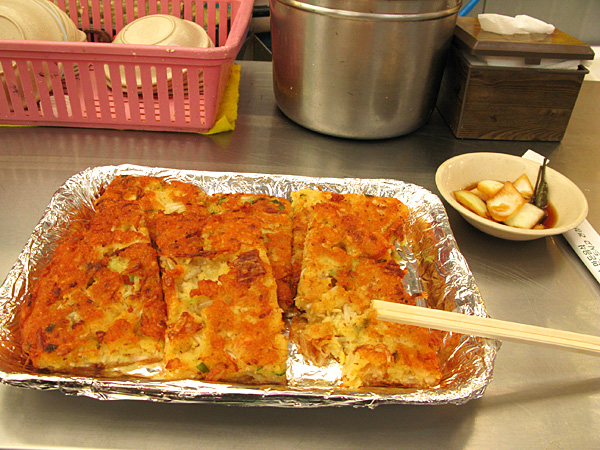 After eating only half of my lunch, I was stuffed and had to move around. I wasn’t in a wandering mood, so I took the subway directly to my next destination, Namsan Park and ultimately the Namsan Tower (or N Seoul Tower).

If I had to do it again, I would not take the cable car up the hill. The line was long, the ticket cost as much as the tower admission itself (7,000₩), we were packed in like sardines, there was no fan or air conditioning in the cabin, and the view wasn’t any better or different than the view at the top. Instead, I would take a bus, walk up the stairs or take a taxi.

As the crowd of people filed out of the cable car and towards the tower, we walked into a sword fighting performance mid stream. The performance was pretty neat and I sat and watched the choreographed moves for a while. It was my one touristy day of the trip, and I wasn’t going to miss a thing!!!

An impressive backbend while sword fighting

The movement of traditional dress

Waiting for his turn to perform

As the crowd dispersed after the performance I scoped out the best spot to hang Nik and I’s “lock of love”. I wanted it to be in the spot with the best view of the city, but it was so foggy and cloudy that I could hardly tell what was a good view. I finally decided on the right hand side of the ramped deck looking to the left of the radio tower (the photo at the top is the view standing right in front of our lock, the one below is not). On one side, our lock has a red and white Ox signifying 2009, the Chinese Year of the Ox because we are spending most of this year in China. On the under side, it simply has our names and date. I have attempted to weatherproof it by wrapping it in clear tape, but I doubt that it will work!!!

Then I hung around and waited for the monsoon rain to come and take the clouds away so that I could have an amazing view of the city. As entertainment, a man named Rafeal sang Spanish songs and played several wooden flutes. I enjoyed the music, and from what I could tell, so did everyone else!

I think he was bored

Ultimately, the monsoon rain never came to sweep the clouds away and I started getting bored around 5pm. I was tempted to stay until nightfall to see the city lights, but that would take at least two more hours and I didn’t think I had the patience.

And seeing all of these couples was making me homesick, so I knew it was time to turn in for the night! 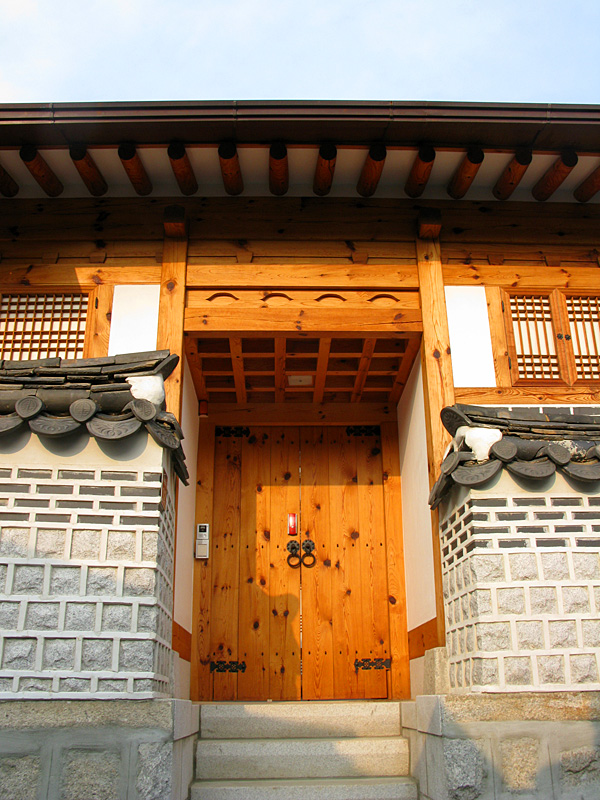 Day 4 began with rain and ended with me being completely smitten with this town. I spent the entire afternoon wandering up and down the lanes of Bukchon between eating meals, drinking coffee and indulging in desert in Samcheongdong. These neighborhoods contain several clusters of traditional “hanoks” in the midst of more modern concrete structures. A hanok is a traditional Korean style courtyard house whose design is based on the Korean equivalent to “feng shui”. Materials, proportions, orientation and function are all considered and utilized to create the most pleasant living environment possible.

My starting point was the Bukchon Traditional Culture Center on Gyedong-gil alleyway where I picked up a beautiful map of the area illustrating all of the cultural sites and each individual hanok. From there I simply wandered around until I got hungry. I took a lot more photos than the ones here, but the sky was so bright that most of them were blasted out. Also, these streets are extremely narrow and I don’t have a wide-angle lens, so it was hard to capture the feeling of the place.

Mrs. Kilburne at her house

Then I went over to Samcheongdong which is a small district to the west of Bukchon that reminded me very much of NW 23rd Avenue in Portland. It was filled with clothing boutiques, restaurants, and fashionable people. Luckily, I had combed Anna’s favorite restaurants flickr photos (of the blog Annamatic) and learned of a couple restaurants to try. One that peaked my interest was a shop serving the traditional Korean porridge called patjuk. Patjuk is a red bean soup made with azuki beans and is often eaten during the winter, but I thought it was quite delicious in late July as well! My bowl contained the soup along with a glutenous rice ball, roasted chestnuts, cinnamon, a green bean of some sort and another black bean of some sort.

The best Patjuk in town!

As I walked down the main street of Samcheongdong, I was blown away with the number of places touting coffee! There were “coffee & waffle” or “cofee & ice cream” or “coffee & wine” or “coffee & bread” or even “coffee & beer” shops on every single corner. I found it a bit ridiculous, but I did have to indulge in the atmosphere a little bit. It is shallow of me to admit this, but I chose my coffee and dessert stops based solely on the decor.

After lunch, Chong Lee drew me in. I fell for it when I saw their “bar stools”. I thought it was clever, so I had a siphoned ice coffee.

Then after dinner, I stopped by Lamb, an adorable little desert shop with a second floor seating area that has huge hinged windows. The interior was done in all white and dark wood and has just the right amount of softness without seeming girly. And they had an ice cream sundae on their menu, so I was sold. Unfortunately, I didn’t look at the price tag. It ended up being 13,000₩ ($10.80), which is pretty steep but was worth every penny. It was the best ice cream sundae I’ve ever tasted.

The Best Ice Cream Sundae EVER

To walk off the extra calories, I meandered through Bukchon a little bit more after dessert. I enjoyed seeing the little alleyways lit only by the occasional street lamp. The textures popped even more than they did during the day.

Finally, I made it back to room #306 and was really missing Nik. This is the longest solo trip I have ever taken and while I enjoyed every second of it, there were plenty of times where it would have been more fun if he had been there.